How I became Vice President — Osinbajo 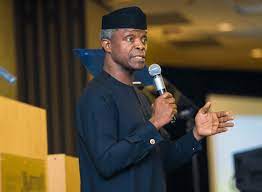 Vice President Yemi Osinbajo, yesterday, recalled how he became the All Progressives Congress, APC, running mate to President Muhammadu Buhari in 2015, saying he was shocked when he got the news from Ogbeni Rauf Aregbesola.

Osinbajo,  who enthused that in terms of preparation for the office of President in 2023, he was the most prepared to take over the mantle of leadership of the country from President Buhari, spoke to State House Correspondents at a breaking of fast (Iftar) in his Aguda residence in the Presidential Villa, Abuja, last night.

He told journalists that the news of his nomination as running mate to then-candidate Buhari in the build-up to the 2015 presidential election came to him as a surprise.

Why I’m telling the story

Osinbajo said he was telling his story to journalists to let them know that an individual’s life can change at any minute, adding that he always believed in and worked for a better Nigeria all his life and his decision to run for the office of president in the 2023 election was to enable him to make a difference.

How we chose Osinbajo — Presidency source

Indeed, a source close to President Buhari narrated the intrigues that shadowed the selection of Osinbajo.

Said the source: “At the end of the day, it was Aregbe (Aregbesola) and Chief Bisi Akande, who supported Osinbajo. Asiwaju had suggested it initially on a theoretical basis but actually wanted the job himself. On the eve of the deadline, the President said he couldn’t do Muslim-Muslim ticket. Asiwaju was enraged. Mr President walked out on him as there was an altercation.

Akande, Aregbe and Oshiomhole were around. The President called Amosun to narrate the altercation as he left Asiwaju’s house

“So, after the President left Asiwaju’s house in Abuja, Aregbe told Asiwaju it has to be Osinbajo. Asiwaju said no, he doesn’t want Osinbajo to benefit after he had opposed Muslim- Muslim ticket. Aregbe insisted, and with Akande’s encouragement sent Osinbajo’s name. By then Amosun had also joined at Asiwaju’s house. Chief Akande signed the paper and sent it to the President. The President’s narrative was captured in Prof. John Paden’s book: “Muhammadu Buhari”— The Challenges of Leadership in Nigeria”.At the Iftar in Abuja, Osinbajo said: “I was working on the case at Penel Apartments in Abuja on December 18, 2014, when at 1 a.m. I received a call from Rauf Aregbesola that they were coming to Lagos to pick me up.

said I was in Abuja. He said ‘good because you have been nominated as the vice-presidential candidate’ and I said is that how you nominate people?”

He added that after his case that day, he returned to his hotel accommodation in the city and immediately after he removed his wig, he was hit by a feeling that “this is probably the last time I will be wearing it.”

He said the current Minister of Interior, Ogbeni Aregbesola, and former Ogun State Governor, Ibikunle Amosun, later in the day took him to the presidential candidate, Muhammadu Buhari.