Hijab Crisis:Kwara Govt Is Of The Muslim, By Muslim And For The Muslim-Reverend Victor 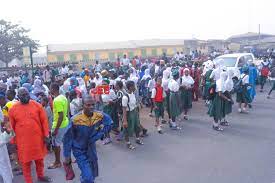 Reverend Victor, President of the Kwara Baptist Conference, has warned the Governor AbdulRahman AbdulRazaq administration and Muslims in the state not to take the gentleness of Christians for weakness.

He said that no amount of pressure will make the schools allow the use of hijabs, adding that their schools are grant-aided and not public schools.

According to him, the last 15 years have seen the government employing Islamic religious teachers in schools, while teachers for Christian Religious Knowledge are not employed.

“It is surprising that the government has become a government of the Muslim, by the Muslim and for the Muslim in his (state governor, AbdulRahman AbdulRazaq) policies, pronouncements and attitude,” the statement added.

He said that at no time has any government designed uniform for schools ever since the grant aiding policy started in 1974.

“This has always been the responsibility of the proprietors, be it community or mission,” he added.

“The Muslims and the government should not take our gentleness for weakness.