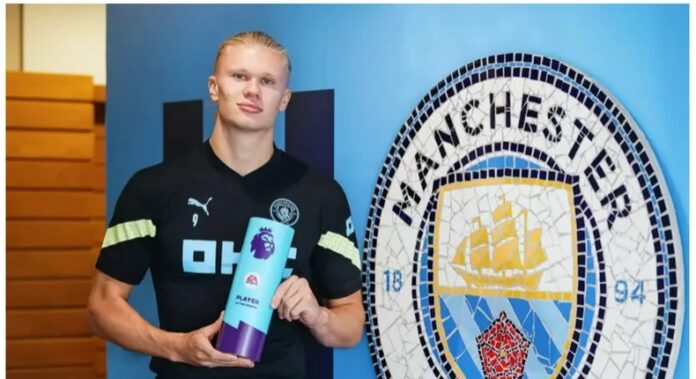 Erling Haaland has been rewarded for a scintillating start to his Manchester City career by being named the Premier League’s Player of the Month for August.

Since arriving in England from Borussia Dortmund, Haaland has scored nine goals in five outings during his first month in the Premier League.

That tally is the highest ever managed by a player in their first five appearances in the competition and included back-to-back hat-tricks in City’s high-scoring wins over Crystal Palace and Nottingham Forest.

In August, Haaland averaged a goal every 44 minutes of league action, or every 12 touches of the ball, as well as converting from 41 per cent of his shots.

The Norwegian has also gone from strength to strength since the month ended, hitting a Champions League brace at Sevilla before returning to haunt Dortmund with a magnificent goal in City’s comeback success on Wednesday.

Having also scored at Aston Villa in City’s first outing of September, Haaland has netted in each of his first three away Premier League games.

Should he score against Wolves at Molineux on Saturday, he will become the first player to get on the scoresheet on their first four road trips in the competition.

Haaland saw off competition from seven other nominees to win the award, including former City striker Gabriel Jesus, who has impressed at Arsenal, and Fulham’s Aleksandar Mitrovic, whose tally of six Premier League goals this season is second only to Haaland’s 10.