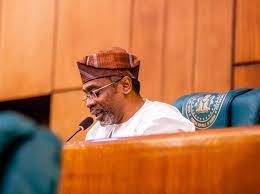 The President, Major General Muhammadu Buhari (retd.), has urged the Speaker of the House of Representatives, Femi Gbajabiamila, to remain patriotic to Nigeria as he has always shown.

This is just as the National Leader and presidential candidate of the All Progressives Congress, Bola Tinubu, said Nigeria is a complex country that Gbajabiamila has to navigate through.

Buhari and Tinubu said these on Saturday at a special prayer session at the Ansar-Ud-Deen central Mosque, Wuse 2, Abuja, which was organised in honour of the Speaker to mark his 60th birthday, according to a statement issued by the Special Adviser to the Speaker on Media and Publicity, Lanre Lasisi.

According to the statement titled ‘60th birthday: Continue to Serve Nigeria, Says Buhari…Gbajabiamila Remains a Patriotic Nigerian – Tinubu,’ the President urged the Speaker to continue to serve the country in every way possible.

Buhari noted that Gbajabiamila, as Speaker of the House, has positively changed the public perception of the relationship between the legislature and the executive.

The Chief of Staff to the President, Prof Ibrahim Gambari, who represented Buhari at the event, said he had been directed to wish Gbajabiamila a happy 60th birthday.

He also noted that the President had always stood for a free and fair process, which was why he was happy when Tinubu emerged as the presidential flag-bearer of APC in such a process.

Gambari was quoted to have said, “The message from Mr. President is to congratulate you on your 60th birthday. He also wants to urge you to continue to serve the country well.”

The Chief of Staff said the House, under Gbajabiamila, has ensured a good working relationship with the Executive arm of the government against the notion in some quarters that the National Assembly should “be antagonistic to the Executive.”

Gambari also said the President wanted to assure Nigerians that he did not have any intention to subvert the Constitution to extend his tenure in office.

Buhari also wanted to reiterate his belief in the aspiration for a peaceful and united Nigeria, according to the Chief of Staff.