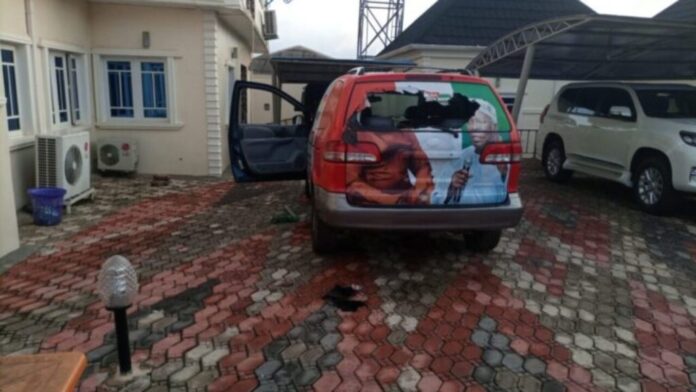 Eight out of the 12 Yoruba Nation agitation supporters who were arrested during a siege on the home of Chief Sunday Adeyemo (aka Sunday Igboho) have regained their freedom from the state security, at least, temporarily. Their release is coming barely after 60 days under the DSS incarceration after they were abducted following a brutal siege laid on the house of Chief Igboho in Soka junction, Soke area of Ibadan in Oyo State.

Indications that they would be released emerged last Friday after a close-door meeting was summoned at the office of the Director-General of DSS, where Barrister Pelumi Olabangbesi was met with top officials of DSS.

Barrister Olabangbesi had given DSS 48 hours last Friday to comply and obey court proceedings by releasing the victims or face contempt proceedings, adding that no single hour would be added before his firm would commence contempt proceedings before a court of law against the DSS and particularly, DSS Director-General. Barrister Olabangbesi also accused the DSS of arrogance and contempt for the nation’s rule of law, adding that the DSS has the penchant to incarcerate and cause pains with no respect for the laws of the land

It has become imperative and urgent to make this brief address in light of the vindictive and oppressive conduct of the State Security Service in the matter involving twelve detained associates of Yoruba Nation activist, Chief Sunday Adeyemo, aka Igboho.

In the wee hours of the 1st of July, 2021, a joint team of men from the State Security Service (SSS) and the Nigerian Military, with neither lawful cause nor a warrant of arrest, broke into the Ibadan home of Yoruba Nation activist popularly known as Sunday Igboho and extra-judicially murdered two of his associates while rounding up, bounding and abducting twelve others to be incarcerated without cause in the dungeons of the SSS where they continue to languish without reprieve to this day.

All twelve detainees who were immediately subjected to degrading conditions of detention and torture were denied access to their lawyers by the SSS up until the intervention of the court through an order recognizing and re-emphasizing the detainees’ right to legal representation against whatever allegations against them.

Regrettably and indeed unacceptable, while no charges, in full or tentatively, have been preferred against all twelve detainees, the SSS has failed and refused to honor an order of a court that granted bail to and ordered the release of all twelve detainees upon the perfection of the terms of their bail which have now been fully satisfied and duly communicated to the SSS.

The refusal of the SSS to honor a clear order of the court, though habitual, is not only worrisome and unacceptable but is an affront to the authority of the court and our entire judicial system. Such blatant disregard for, and contemptuous, spiteful, and insolent disrespect of an order of court if allowed to fester would undermine the very integrity of the court and breed even newer levels of rascality by STATE AGENTS. It would also amount to surrendering the freedom and rights of all twelve detainees to the whims and caprices of an agency that has gone rogue and thrives in willful disobedience of court orders.

In light of this, we are giving the SSS, particularly its Director-General, forty-eight (48) hours and not an hour more, within which to fully obey and comply with the release order of the court in favor of all twelve detained associates of Mr. Sunday Igboho or face contempt proceedings before a court of competent jurisdiction with the full weight and recompense of the court brought to bear against his insolence and disregard of the court order.

Take notice that we will not fail to exhaust all legal and social remedies available to the detainees in enforcing their rights in this matter and setting the tone against the SSS’ notorious disregard of due process and the rule of law.