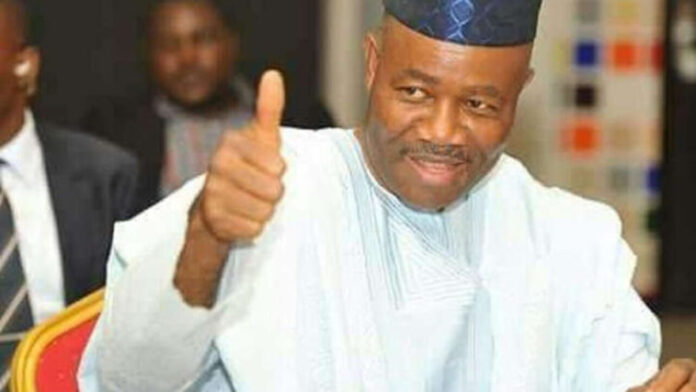 Ex-Minister for Niger Delta Affairs, Godswill Akpabio, has emerged the winner of the Akwa Ibom North-West senatorial primary under the All Progressives Congress platform.

The first primary conducted on May 28, 2022, for the senatorial district was cancelled following security infractions during the primary.

Akpabio was a presidential aspirant under the ruling party but stepped down for former Lagos state Governor, Bola Tinubu, who won the party’s presidential ticket.

He won the rerun poll having garnered 478 votes, while Sir Joseph Akpan had only one vote, and the former Deputy Inspector general of Police who initially won the first primary had three votes.

Out of the 540 delegates for the rerun primary, 512 were accreditated to vote while eleven votes were voided.

“I know a lot of projects were done across the ten local government areas, from markets to water projects, to electrification project, to the building of classroom blocks,” he stated.

Speaking earlier, the State APC Chairman, Mr Stephen Ntukekpo, said he was directed by the party at the national level to carry out the re-run, as infractions were sighted in the first primaries.

He said, “The first primaries took place on May 28th and all of you were there. Today, our father has joined the race. I, Obong Emem Ekperikpe Ekpo, a former member of the House of Representatives, a son of this senatorial district, I plead with all my delegates to identify with our father, and I return all the delegates to vote for him.

“I don’t think we should do anything to undermine the person God has given to us as a leader. The person is Senator Godswill Obot Akpabio. I call all my delegates once again to support him. With that, I have withdrawn my aspiration to the senatorial seat.”

The five-man committee that monitor the primaries was led by the Chairman, Sir Sylvester Okonkwo, Secretary, Alhaji Salisu Isa, and Mrs Bunmi Imole, who was the returning officer, among others, as well as officials of the Independent National Electoral Commission.