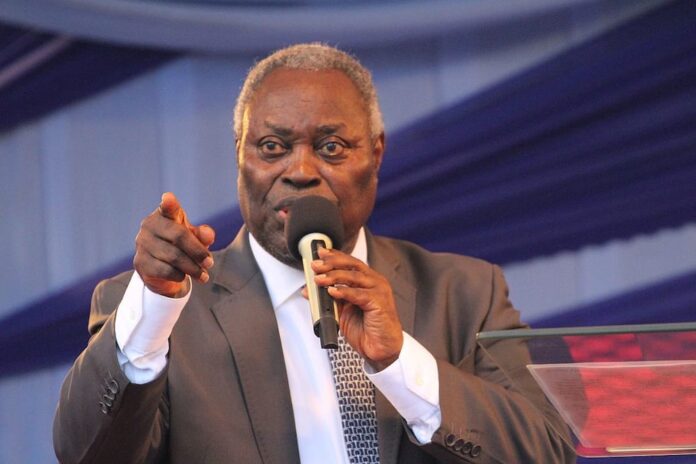 The General Overseer of the Redeemed Christian Church of God, Pastor Enoch Adeboye, and other anointed men of God have extolled the leadership and evangelical virtues of the General Superintendent of Deeper Life Church, Pastor Williams Kumuyi.

This was contained in a book titled, “Kumuyi: Defender of the Faith” which is authored by four pastors, namely Banji Ojewale, Segun Babatope, Emeka Izeze and Tunde Opeibi, and forwarded by the General Overseer of the Redeemed Christian Church of God, Enoch Adeboye.

Adeboye in his forward on the book described Kumuyi as one of the greatest teachers of the Bible in the present generation.

“In our opinion, Pastor W. E Kumuyi is one of the greatest teachers of the Bible in our generation. He will be remembered for generations to come for his in-depth exposition of the word of God, his passion for evangelism, his commitment to Christ and his life of purity and self-discipline, which combined to reveal the manifold presence of God among men.

“Pastor W. F. Kumuyi is a living testimony of the faithfulness of God to anyone who devotes his life and time to seek and serve God; a testimony which provides the inspiration and foundation for this book.”

Speaking at the book’s presentation in Port Harcourt, at an event organized by the International Friendship League, one of the book author, Pastor Emeka Izeze, said the clear intention of God to have all men saved was the central message of the book.

Izeze stated, “His (Kumuyi’s) life has become a big message for people. There is no one who will read about the life of Pastor Kumuyi that will not be inspired.

“The involvement of God in his life, the millions of lives he has impacted. We believe his life is a channel to telling people about the gospel of Christ.”

Earlier, the Coordinator of the International Friendship League, Pastor Israel Mkpaoro, said the book was not a replacement of the Bible, but rather a pointer to it, as it captures the life and ministry of the revered preacher, Pastor Williams Kumuyi.

“The life and ministry of the visionary, dedicated, disciplined, focused and exemplary preacher and man of God, Pastor Dr. W. F Kumuyi, have a lot to teach us.

“For instance, for those seeking to know God, reading through Law to Kumuyi’s conversion experience would provide ample guide. Also for those who want to succeed in their callings, his experiences in the ministry have a lot of inspiration to offer,” he stated.

Chairman of the event, Pastor Prof. Ezekiel Williams, said the event was to bring souls to Christ through the storytelling of a global icon and holiness preacher, Kumuyi as contained in the book.

“The sterling and exemplary life and ministry of Pastor W.F Kumuyi have been and are still transforming lives in their thousands all across the universe, bringing souls to Christ and preparing heaven-bound pilgrims for their eternal abode.

“This book, a biography of the living legend of our time, contains stories and first-hand hints on how he a saved sinner- like Apostle Paul, has yielded himself for God’s use in bringing the sinners to Christ as God would have all men saved, and come into the knowledge if the truth,” William said.