2023: Asíwájú Tinubu and The North 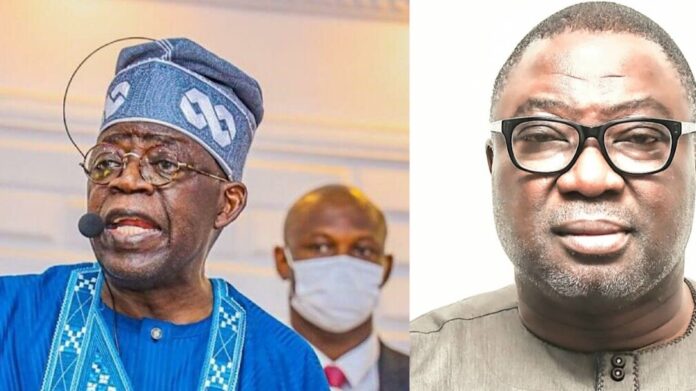 Tunde Rahman, the media advisor to Asiwaju Bola Ahmed Tinubu, speaks on the Presidential Candidate of the All Progressive Congress, Bola Tinubu relationship with the Northerners.

Could there have been a better and more appropriate platform to interact with and relate to the North than the one provided by the North itself? Certainly no!

This is because sensing the need to come together and present a charter of demands to top presidential candidates in the country in order to procure a better deal for the North in 2023, some influential groups and institutions in the region had created an avenue that brought the critical stakeholders together to interface with the candidates ahead of the elections.

It was the first time the North would emplace such a powerful forum to listen to what the candidates have to offer.

Asiwaju Bola Tinubu, the All Progressives Congress Presidential Candidate, honoured the invitation of the organisers of the conference and came before the region as it were on Monday, October 17, 2022.

That he attended the forum despite the allegations that trailed its perceived agenda was a demonstration of good faith by the APC candidate and high esteem in which he held the organisers. Asiwaju Tinubu did not waiver in his resolve to attend the session even when informed of the allegations.

For instance, he was told the allegedly hidden intention of the organisers was to deploy the forum to endorse the candidature of Atiku Abubakar of the Peoples Democratic Party.

He was told Atiku had bankrolled the conference and was waiting to reap from his alleged investment.

Two or three critical developments around the conference, were interpreted by many observers as giving stimulus to these conspiracy theories.

One, the PDP candidate had scheduled a campaign visit to Kaduna well ahead of the conference, suggesting perhaps that he may have long been apprised of the dates for the forum ahead of others.

Two, the pairings of the candidates also seemed skewed ostensibly to favour the PDP candidate. Why this perception?

When Atiku appeared on Day One of the conference, he was the only seemingly significant candidate scheduled for the day.

Also, on the day the trio were supposed to appear, Atiku had staged a campaign rally at the city stadium, a short distance from Arewa House venue of the conference. However, Asiwaju was unperturbed, telling this writer the organisers of the conference were important institutions and prominent groups he must honour.

He wanted to seize the opportunity to engage the North as he takes his campaign message of hope, full security, national unity and economic development embodied in his Action Plan christened Renewed Hope to all segments of the Nigerian society.

The organisers of the conference themselves were not oblivious of this underlying allegation. As the conference opened on Day One, the Secretary-General of Arewa Consultative Forum who doubled as the moderator for the event, Mutawalin Gombe, Dr. Murtala Aliyu, dismissed the accusation, assuring everyone present there was nothing like that, Asíwájú seized the moment at Arewa House.

His emergence at the arena was as remarkable as the substance of his offerings to the North and the way and manner he delivered the message.

The APC presidential candidate arrived at the forum with an entourage comprising a majority of the Northern governors and some political leaders, thus making a big statement.

In his entourage were his Vice Presidential Candidate, Senator Kashim Shettima; Chairman of the Progressives Governors’ Forum and Governor of Kebbi, Alhaji Atiku Bagudu; Director-General of the APC Presidential Campaign Council and Governor of Plateau, Rt. Hon. Simon Bako Lalong, and Kaduna State Governor Nasir el-Rufai. There were also Governors Abubakar Badaru (Jigawa), Mai Bala Buni (Yobe), Abdullahi Sule (Nasarawa), Abubakar Sani Bello (Niger) and Bello Matawalle (Zamfara) as well as former governors Saidu Dakingari of Kebbi State, Comrade Adams Oshiomhole of Edo and Abdulaziz Yari of Zamfara among others. At every turn, Asiwaju praised the governors for standing by him in the ongoing presidential battle, calling them promise-keepers.

The APC candidate shared both his blueprint for Nigeria’s development as well as his plans for the North at the interactive session.

Some of the highpoints of his presentation bear restating here. He began by eulogising past leaders of the country including Nigeria’s late Premier of the region, Sir Ahmadu Bello, Nigeria first and only Prime Minister, Tafawa Balewa, Sir Ahmadu Bello, Chief Obafemi Awolowo and Chief Nnamdi Azikiwe for being visionary leaders who gave their all to nation-building. Incidentally, on arrival in Kaduna he had first visited the tomb of the late Sardauna of Sokoto, Sir Ahmadu Bello, who he prayed for, for his invaluable sacrifice to the North and country.

Addressing the gathering, he had said: “As I said when I chaired the Sardauna Memorial Lecture, last year, I have a solemn feeling of responsibility and duty to our country every time I am here. Standing here evokes memories of a great leader and a father of this nation, the late Sir Ahmadu Bello, the late Sardauna of Sokoto.

The contributions of the Sardauna to nation building remain a reference point for us all. He was a visionary builder of men and institutions.”

He spoke of the vision of the foremost leaders of Nigeria, which, according to him, was for one indivisible and prosperous nation built on shared values of patriotism, equity, justice and brotherhood.

It’s no coincidence, according to him, that at independence, this vision was clearly laid out and encapsulated in the first National Anthem, which says ‘Though tribes and tongue may differ, in brotherhood we stand.’

This is a strong statement which acknowledges the country’s diversity and existence of different perspectives and interests and how that should not stand on the path of unity, he said, while pointing out that the framers of the anthem would baulk to know that 62 years after, “someone would come to the Arewa House to campaign on the basis of tribe or where others come from,” apparently taking a swipe at PDP candidate Atiku who asked the North to vote him because he is from the North.

On his plans for Nigeria as president, Asiwaju said he would consolidate on the investments of the President Buhari administration in all sectors of the nation to build on the successes recorded.

The APC presidential standard-bearer also spoke of his plans to ensure that insecurity is nipped in the bud in the North and across the country, harness the resources which abound in every part of the nation for greater economic development and utilize the vast natural resources through strategic investment in infrastructure which will lead to the diversification of the economy and wealth creation across the entire country.

He promised to pay attention to modern economic drivers such as the digital economy, creative industries, sports and entertainment sectors for the benefit of the young people.

Leveraging on his experience of building human capital, which made Lagos one of the largest economies in Africa, Tinubu promised to grow the nation’s economy to an enviable height, while also working to reposition existing industries in the country, making them a competitive source of industrialization and growth not just for the North but the entire country.

“It is time to fetch water from a dry well and I, Bola Ahmed Tinubu, have done it before and I will do it. We will find a way where there are no roads,” he said proudly. While some of the presidential contenders see only despair and failure at every turn, Asiwaju does not deny the immensity of the challenges but preaches the messages of hope and light at the end of the tunnel at every point.

Speaking specifically on his plans for the North, he said the region has a greater advantage in agriculture, and that under his presidency, the region will emerge as the hub of agribusiness in Africa through huge investment in the sector in collaboration with the private sector. “Agriculture is of special interest to me.

It is both an economic and existential issue for every country. Experience in the last seven years has shown the potentials of agriculture in solving the problem of unemployment and boosting our GDP,” he pointed out while citing the example of the recent investment in the rice value chain, which led to the springing up of rice mills across the country with attendant wealth creation and reduction in the import bill.

He said his vision is for the North to be the hub of agribusiness in sub-Saharan Africa because the region has greater advantage in this regard due to its large and abundant arable land.

Asiwaju said he would mobilise investment in the livestock value chain, adding that subsectors like the dairy industry that have the potential of adding billions of dollars into our economy will receive significant attention.

In collaboration with the private sector and governments at sub-national levels, he promised to make available high yield seeds and inputs, invest heavily in post-harvest storage and processing facilities so the country can significantly increase the value of what she produces.

To ensure optimizing the full value of their produce, he would utilize Commodity Exchanges to guarantee return on investments and enhanced wealth for the farmers.

Identifying financing as critical to his vision for the agricultural sector, he assured the North he would attract the much-needed investment and re-engineer financing institutions to provide impactful interventions for maximal output.

On his plans for education and reducing out-of-school children in the North, the APC presidential flag bearer while noting that education is the most effective weapon against poverty said compared with other countries, education in Nigeria suffers from funding deficit on account of the population and limited resources.

Therefore, he said, working with both states and local governments to reform and retool the system, he would provide the required leadership and mobilize investment for the development of the sector.

These reforms, according to him, will give special attention to the welfare and training of teachers and lecturers as necessary catalyst for the better system the North desires.

Asiwaju also identified some priority roads and hydropower projects in the North which are ongoing and which he will follow through and new ones he would introduce to aid the development of the region.

Among the power projects he mentioned were the 950MW Zungeru- Kaduna River, 2000 MW Lokoja- Niger River and 1000MW Makurdi-Benue River.

Many were gripped by his presentation and the way and manner he calmly but firmly responded to the questions thrown at him.

Asiwaju’s promise to the North is no fluke I must say.

It is not a vote-grabbing gimmick.

Asiwaju is a true friend of the North.

He has created and maintained a cordial relationship with the North where his friends and associates dotted the landscape.

He has built bridges across the Niger.

Asiwaju has always identified with and risen in support of the North when challenged by natural occurrences and other unfortunate developments.

From Kano State to Katsina, Jigawa to Zamfara and other diverse places in the North, stories abounded of how the APC candidate had supported the people when attacked by bandits or troubled by flooding or other disaster.

I have no doubts he will do more for the North and other parts of the country if elected president.

Asiwaju was certainly not just playing politics when he asserted that he had always identified with the region right from his association with the late General Shehu Musa Yar’Adua and support for other northern presidential candidates over the years and that he did not, like some others, only remember he was from the region when he needed to ask for their votes.