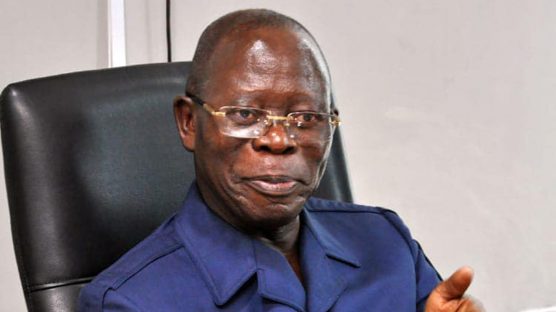 What are his claims to civility and democratic ethos and decency?

What are his political ideas and governance principles?

In civilized societies and climes, such a loquacious vanity of power drunk functional illiterate, who gleefully told an innocent widow “to go and die” will be cooling off in the gulag for abuse of ephemeral power, given to him by the electorates, including the woman he made victim of his ruinous administration in that state.

In the inferno, all the pre and post colonial documents, including certificates of persons who ever lived and worked in that part of the country were lost forever!

In 2013, Oshiomhole conducted a sham election across the 18 Local Government Election Areas of Edo State.

He was the player, umpire, and the goalkeeper at the same time. While the election was still going on in Uromi, with the report that one Mr John Yakubu of the opposition People’s Democratic Party (PDP) was leading in the polls, Oshiomhole called the electoral officials in charge to announce that Mr Yakubu has lost the election.

This is one of Oshiomhole’s history, he wants the Nigerian electorates to forget because as a hermit and bully tyrant, the more the people forget, the more he entrench himself in the national politics of deception. How do we reconcile the fact that a man who borrowed a catch phrase titled “One Man One Vote” would suddenly descended into a bizarre cul-de-sac of electoral infamy at the detriment of citizens who wished for a better representation?

Oshiomhole’s baleful criticism of Peter Obi of the Labour Party is akin to a remorseless prodigal child’s reckless attack on his father, after squandering a life time. Even though, we know that Oshiomhole is every but progressive, with his penchant for outright deceit, manipulative tricks and hollowness, Nigerians still expect him to distance himself from the Labour Party and Peter Obi in his best interest.

One of the major undoing of Adams Oshiomhole is his mental corrosion and the believe that everyone is as backward, narrow minded, shameless, and corrupt as himself.

At the twilight of his exit from Edo State Government House in November 2016, Oshiomhole forced State House of Assembly to legislate Two Hundred Million Naira (N200m) annual pension and Three Hundred Million (N300m) to build two houses for him in Lagos and Abuja, and a modern Jeep of all time and five domestic staffs for himself as long as he remained alive!

Who should Nigerians elect into the nation’s presidency between Peter Obi of the Labour Party and Bola Amhed Tinubu of the APC whom, Oshiomhole borrowed a leave from by legislating billions of naira for themselves after leaving office while the taxpayers languished in adjacent poverty, darkness, collapse of state and national infrastructure and unremitting corruption?

Peter Obi has told Nigerians to fact-check him on all issues, including the fact that he hasn’t taken a dime from Anambra State Government since he left office, including pension for former Governors or land allocation to him or any of his family members. Oshiomhole as Edo State Governor forcefully revoked people’s landed property, including that of the late Prof Osayuki Oshodi, the former University of Benin Vice-Chancellor and built his personal house on the piece of land in GRA, in Benin City.

Yet, the 78 years old Oshiomhole with more than five houses already built in Abuja is currently building a multi billion Naira house in Asokoro when he is almost close to his departure hall. Oshiomhole should have learned one or two basic lessons of human frailty, vanity nature of stolen wealth with the rumours making the rounds that the dollars he buried in his house at Iyamho have been eaten up by termites!

Oshiomhole is no less a thoroughbred prankster, attention seeking conman and a groping half-baked creature of mere surfaces, with primitive inclination for avarice, fraud and graft. It’s common knowledge that piles of petitions against him are before the Economic and Financial Crime Commission (EFCC), and the Independent Corrupt Practices and Other Offences Related Commission (ICPC) for the brazen looting of Edo State resources for 8 years.

Who will tell Oshiomhole to concentrate on the failed promises APC made to Nigerians from 2014 to now, and stop campaigning after the woeful failure of his party?

Who will educate Oshiomhole that his empty twitches are not adding up? Who will tell that like Ichabod, the glory has departed from him?

Oshiomhole’s tragic outing on Arise Television programme solidly reinforces the call for facts checking our history, to avoid accidental leaders from riding the roughshod to power.