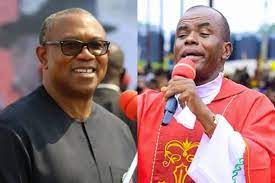 The outspoken preacher, who had just recently been replaced as spiritual director of Adoration Ministry Enugu (AMEN), announced this in a video he posted on Facebook immediately before going to the monastery.

Mbaka was reported to have declared during a Sunday service in June this year that the former Governor of Anambra State would not win the presidential election.

He, however, clarified that he did not mention Obi or talked about him during the said service, adding that it was the work of purveyors of fake news.

He said: “After handing over to Fr. Anthony Amadi on Sunday, I started hearing that Fr. Mbaka spoke against Peter Obi. ‘I, Rev. Fr. Mbaka, on that Sunday never mentioned Peter not to talk of Obi.’

“Please, whoever is being used by the devil to blackmail me in the name of doing any job for anybody is satanic and should apologise, withdraw such nefarious and satanic utterance and be careful when you want to harm the image of a man of God.

“Whoever did that, I have forgiven you, but I want to hear that you have apologised and withdrawn what you said against me on that day just to put the Adoration ministry in trouble.”

He advised those who, according to him, are planning to protest over his replacement as the spiritual director of the AMEN to desist from the plot.

“Rather than help me, the protest may jeopardise my priestly call.  Therefore, encourage peace, encourage love, within this time and do more prayers and God of heaven will do the rest for us in Jesus name.”